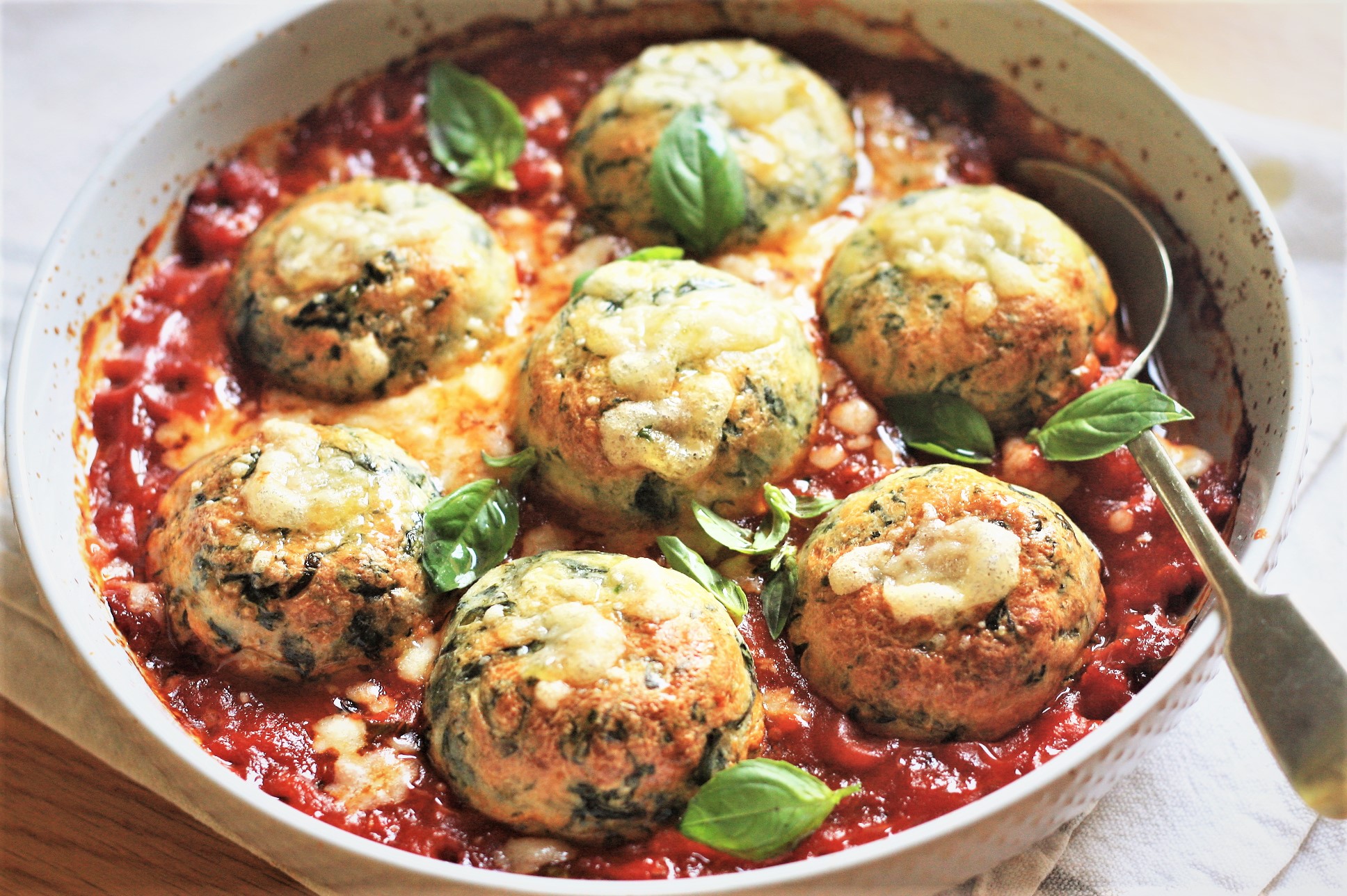 A while ago I decided to try my hand at cheesemaking - as a devoted lover of cheese I think it was inevitable that I would try to make my own sooner or later. The obvious starting point for any amateur cheesemaker is ricotta. It's the simplest of cheeses - simply add something acidic, such as lemon juice, to some milk to split it into its constituent parts, and drain. Season the resulting drained curds with some sea salt and you're done; it's that easy. The nice thing about ricotta is that it's typically made with either lemon juice or vinegar, rather than rennet like most other cheeses, so you don't need any specialist ingredients. This dish was inspired by a recipe for a Corsican/Italian dish called _strozapretti_, which consists of rustic ricotta dumplings loaded with chopped fresh herbs and chard. It's like ravioli but with just the stuffing, and no pasta surrounding it. Traditionally the dumplings would be fairly rough and imperfect in shape, but I have shaped mine nicely into rounds. I've also baked them in the oven until golden, which is fantastic if you grate parmesan on top first. Baked in a rich tomato sauce, it's pretty irresistible! The ricotta for this recipe should be quite firm, which is easy to achieve if you make your own. Click [here](https://www.grubdaily.com/ricotta) for my own ricotta recipe. Alternatively, you can use shop-bought ricotta and drain it overnight in a fine sieve. --- * 200g firm ricotta * 80g baby spinach * 1 small bunch of mint, leaves picked * 1 small bunch of basil, leaves picked * 25g parmesan, finely grated * ½ tbsp extra virgin olive oil * 3 tbsp plain flour * 1 egg * 2 tins of chopped plum tomatoes * 1 small onion, finely chopped * 1 clove garlic, finely chopped or grated * 1 sprig of thyme * sea salt and cracked black pepper * vegetable oil, for frying * olive oil, for frying 1. Place a saute pan over a medium heat and add a little vegetable oil. When the oil is hot, add the spinach along with a small pinch of salt. Saute until the spinach is wilted, then drain in a sieve. 2. Reserve a selection of the nicest, smallest basil leaves for garnish at the end. Finely chop the mint and roughly chop the remainder of the basil, then place in a bowl. Add the ricotta, flour and egg to the bowl also. 3. When the spinach is cool enough to handle, with clean hands squeeze as much liquid out of the spinach as possible, then roughly chop and add to the bowl with the ricotta along with a generous pinch of black pepper, and sea salt to taste. 4. Line a large tray with greaseproof paper, then divide the ricotta mix into equal portions. Shape each portion into an approximate ball shape and set on the tray. The balls will be quite sticky but don't worry, we're going to re-shape them before cooking. Place the balls in the fridge to cool for 3 hours. 5. Meanwhile, make your tomato sauce; heat a medium pot or saute pan over a medium heat and add 1 tablespoon of olive oil, once it's hot, add the onion and garlic and a couple of pinches of salt and cracked black pepper. Sweat gently for 10 minutes until soft, then add the tomatoes and thyme. Turn the heat to low, and simmer gently for 20-30 minutes. It should have turned darker and richer. Remove from the heat and discard the sprig of thyme. 6. Get a large pan of water boiling on the stove and season it generously with salt. Remove the balls from the fridge and, with floured hands shape them into nice round dumpling shapes. With the water at a rolling boil, cook the dumplings 3 or 4 at a time. The water should barely stop boiling when you add each batch. After they float to the surface cook for a further 30 seconds then remove and drain in a colander. 7. Heat the oven to 180C. In a casserole dish or oven-proof bowl, pour in the tomato sauce and add the dumplings. Scatter over the parmesan then place in the oven for 25-30 minutes, until the dumplings are lightly browned. 8. Garnish with the reserved basil leaves and serve.
22 Apr, 2018 risotto bacon pea italian 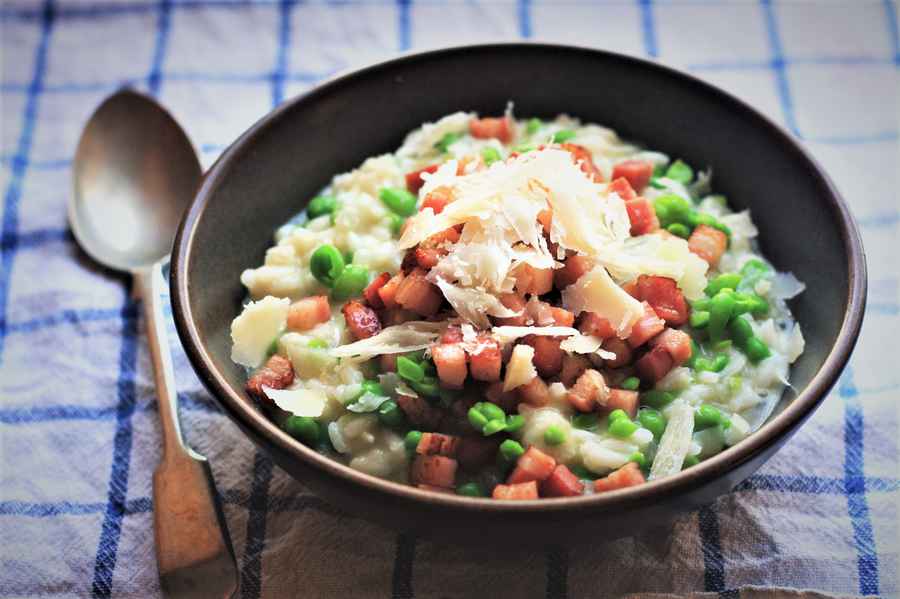 The risotto remains one of my regular weeknight meals. It's quick to prepare and, to make a plain _risotto bianco_, requires only a few basic ingredients. It's what I call a "store cupboard" meal, meaning that the ingredients it comprises all keep for a long time, either in the fridge or the cupboard, so you can always keep them in stock, waiting to be made into a delicious risotto at a moment's notice. My [winter risotto](https://www.grubdaily.com/risotto-winter-greens) was essentially just a plain risotto with some cavolo nero added. I've taken a similar approach here, but with peas, to keep it seasonal. I've added some crisp bacon lardons for good measure. The salty savouriness of the bacon compliments the sweet peas perfectly and it provides a lovely colour contrast, too. --- * 140g risotto rice * 1 small onion, finely chopped * 2 cloves garlic, finely chopped * 1 glassful dry white wine * 60g parmesan cheese, finely grated * 40g unsalted butter, chopped * 1 tablespoon extra virgin olive oil * sea salt and freshly cracked black pepper * 200g garden peas, fresh or frozen * 150g streaky bacon, cut into lardons * 1 litre chicken stock * vegetable oil, for frying 1. The secret to a good risotto is to stir it _continuously_ as the rice is cooking. This is the only way of getting the ultimate glossy and thick texture. You won't have time to do any prep at the same time so be sure to measure all the ingredients out and get everything chopped before you start. 2. Place a medium sized frying pan over a medium heat and put in about ½ tablespoon of vegetable oil. When the oil is hot, add the lardons and fry until crisp. Remove the lardons from the pan and set aside in a bowl. 3. Now to start the risotto. Place a medium high-sided pot or pan over a medium high heat and add the olive oil. Wait until the oil is hot, about 1 minute, then add the onion and garlic along with a pinch of salt. Immediately turn down the heat and cook slowly for about 15 minutes, stirring occasionally, until the onions are soft and sweet. This is the _soffrito_. 4. Now turn the heat to high and add the rice. Stir vigorously for about 30 seconds to coat the rice in the flavour of the soffrito, then add the wine. Turn the heat to medium-high and continue to stir until all the liquid has gone. From this point the risotto will take about 15 minutes.Continue to add the chicken stock, 1 ladleful at time, stirring continuously to massage and coax the starch from the rice. This creates the thick sauce of the risotto. 5. After about 15 minutes, the risotto should be ready. When you taste a grain of rice, there should be a _slight_ bite to it. If it's still quite hard, continue cooking for a bit longer. Turn the heat off, then add the chilled butter and parmesan gradually, whilst beating the risotto to emulsify it into a lovely creamy texture. If it seems too thick, add a bit of stock. As Giorgio Locatelli says "It should ripple like waves on the sea". If you run out of stock, just use boiling water. 6. At this point, add half of the peas to the risotto and stir through. Portion the risotto into bowls and garnish with the remaining peas and lardons. Finish with some parmesan shavings.