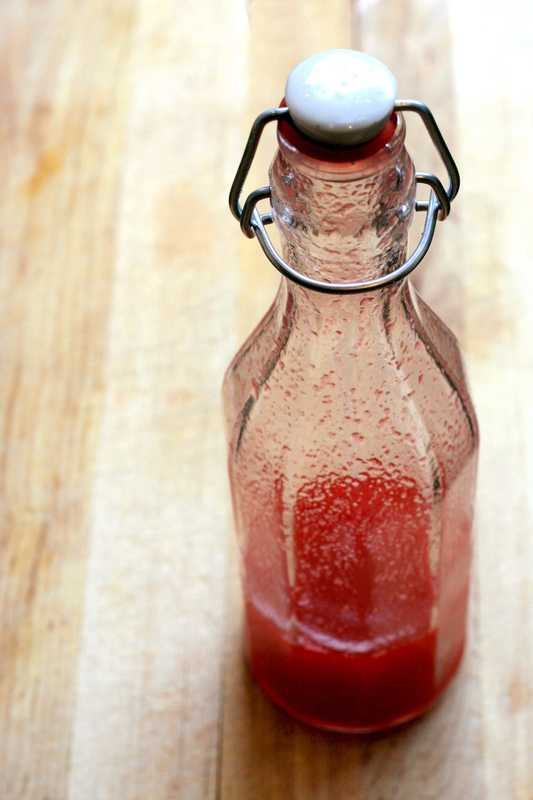 I had some leftover raspberry purée from when I made the chocolate and raspberry brownies, so I decided to turn it into cordial. My mum makes blackcurrant cordial from hoards of blackcurrant bushes we have back home and it’s fantastic. She puts it in empty Ribena bottles and it’s indistinguishable from the genuine article! I’ve always loved Ribena, and although blackcurrant cordial is quite readily available I’ve never come across a raspberry version. So here it is; the sweet taste of summer in a bottle.

A basic fruit cordial consists of fruit, sugar and water. My first attempt was simply to make a sugar syrup, add the raspberry purée and bring to the boil. The result was excellent, yielding a really fresh raspberry flavour. When I subsequently did some research online, I found that most of the recipes for fruit cordial involved heating the sugar water and fruit together and simmering for 10 minutes or so before allowing to cool and bottling. I tried a second batch using this method, also adding some lemon juice and peel for a extra dimension in flavour, and although the flavour was good it was not as fresh as the first method which didn’t involve cooking the fruit for as long. In addition I think it tasted better without the lemon; I believe the amazing flavour of fresh raspberries should be allowed to shine without hindrance. This is simple, unadorned raspberry flavour!